Puglia is historically regarded as a prosperous and fertile land and, from the point of view of wine production, it is one of the most active regions in Italy thanks to its climate and fertile soil, which make for excellent vine and olive cultivation.

Here Cantine Ermes operates in two areas. The first is the province of Brindisi, where the climate is continental, with cold winters and long, often hot summers; the soils are deep, with good drainage capacity and little water loss.
The province of Lecce, on the other hand, is characterised in its wine production by its proximity to the sea, with cool, constant breezes: this pedoclimatic peculiarity gives the wines minerality. The area of Guagnano in particular is characterised by over a thousand hectares of vineyards, mainly Salice Salentino and Malvasia Nera. 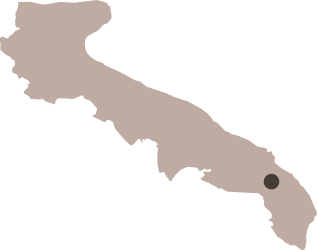 Founded in 1955, in the centre of the ancient Land of Messapi, the Cantina Riforma Fondiaria of Mesagne has a system for controlling the temperature of fermentation of the musts and is equipped with a Slavonian oak barrel for the refinement, in wood, of wine. Since 2018, it has been collaborating with Cantine Ermes.

The winery is located in Guagnano, a small village in Salento particularly suited for the cultivation of Negroamaro and Primitivo, thanks to the soil and climate conditions, the deep loose soil with a good limestone matrix and a unique microclimate. The winery is located in the middle of a strip of land that is influenced by the winds blowing from the Adriatic Sea and those blowing from the Ionian Sea.